Somerville, TX. – The Bayou Bassin League’s team championship did not disappoint! The team of Brock Harrison and Brent Whitmire came into the Lake Somerville event with confidence after having a few great practice days and thought they might be on the winning summer pattern. Lake Somerville has gone from being 11 feet above full pool to just below pool in the last two months. This has caused the fish to be scattered and very tough to locate over the last month.

The team had a lucky draw on their boat number and were first at take-off. They capitalized on that advantage by being the first on a well-known hotspot and caught their monster of a kicker fish weighing in just under 9 pounds at 8.94. They caught the lunker on a rocky point that had a steep drop-off on a top water bait. That first fish set them up for success for the rest of the day. The remainder on their limit came from fishing backwater creeks away from the boat traffic. In the backwaters they were able to cull up to their winning weight of 17.46 pounds by flipping soft plastics in wood that was moved into the creek channels by the floods a few months earlier. Their backwater pattern helped them take the win and get the bid to go to the 2019 Bassmaster Team Championship on Lake Hartwell.Brock and Brent are extremely excited to represent the Bayou Bassin League at the Bassmaster Team event in December and hope this win keeps the momentum going for the upcoming BBL season that kicks-off in October on Lake Houston. 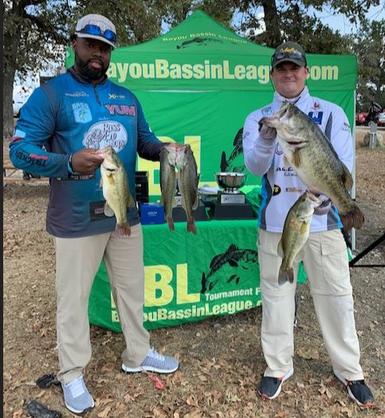 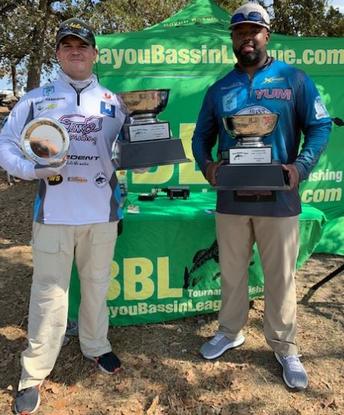